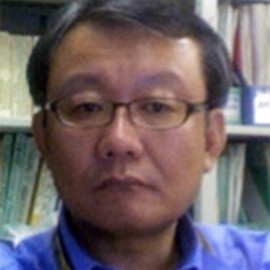 Kazuhiro Miyazaki holds Ph.D. in Geology. He is a deputy director of the Geology and Geoinformation Research Institute, Geological Survey of Japan (GSJ), AIST. He is also an associate editor of Island Arc (an international journal of Geological Society of Japan). His research field is metamorphic geology, especially textural evolution of metamorphic rocks using statistical analysis and numerical simulation, and evolution of metamorphic belts using geological mapping and thermal-advection modelling.

Kazuhiro has worked in GSJ for over 25 years, contributing to compilation of 1:50 000 and 1:200 000 scale geological maps in Japan. He also joined the ITIT research project on mineral resource assessment in fragmental oceanic crust, which was a collaborative project between GSJ, University of London (United Kingdom), Research and Development Centre for Technology, and the Geological Research and Development Centre (Indonesia) from 1992 to 1995. Kazuhiro was project manager of the geological mapping project of GSJ from 2007 to 2012, which included the completion of the 1:200 000 geological map of Japan in 2010. He also managed the project for the next generation 1:200 000 scale seamless map of Japan.

The Institute of Geology and Geoinformation