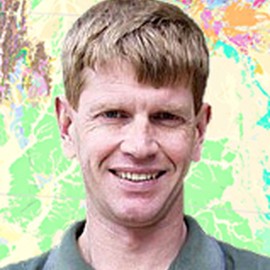 Ollie Raymond has been involved in compiling and managing digital geological maps and databases at Geoscience Australia (GA) for over 20 years. He is currently leader of GA’s minerals and petroleum data management team, and is custodian of GA’s national geological databases. Ollie’s initial experience at GA was in regional geological mapping, focussing on mineralising systems. Prior to joining GA, Ollie was a mine and exploration geologist at the Mt Isa province in north Queensland. He is a graduate of the Australian National University (BSc) and the University of Tasmania (MSc) in economic geology.

Ollie has been involved with GIS, geoscience standards, and data modelling since 1992, initially as coordinator of Geoscience Australia’s first GIS data dictionary, then as leader of the project to compile the national geological map of Australia. Ollie has designed databases and vocabularies at Geoscience Australia for geological maps, stratigraphy and geological provinces, boreholes, mineral deposits, geomorphology, and petrophysical data to name a few.