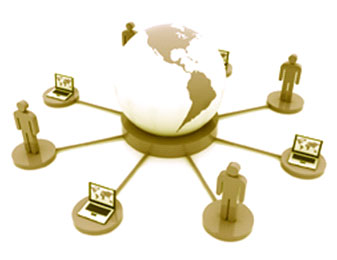 Welcome to Edition #3 of the CGI Newsletter. In this edition we particularly highlight the achievements of CGI members honoured with international awards in 2014.

Three members of CGI have recently been honoured with awards from international information management and data standards organisations. 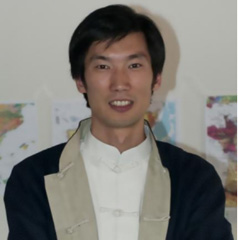 Dr Xiaogang (Marshall) Ma was awarded the World Data System (WDS-ICSU) Data Stewardship Award for 2014 at the SciDataCon 2014 Conference in New Delhi. The award highlights exceptional contributions to the improvement of scientific data stewardship by early career researchers through their engagement with the community, academic achievements, and innovations.

Marshall is a geoinformatics and data science researcher with extensive research in geoscience ontologies, and has worked recently on the capture and representation of data provenance in scientific workflows. Marshall is a member of the CGI Geoscience Terminology Working Group, the International Association for Mathematical Geosciences (IAMG; founder and first president of IAMG’s student chapter in 2010), the American Geophysical Union, and the Federation of Earth Science Information Partners. Marshall was coordinator for the GeoData 2014 workshop (highlighting inter-agency data networks in the US), and the 2014 Deep Carbon Observatory Data Science Day symposium, and organizer of a data provenance session for the Association of American Geographers 2014 Annual Meeting. See slides of Marshall’s award lecture “Why Data Science Matters”.

Dr Peter Baumann, Professor of Computer Science at Jacobs University and a current CGI council member, was awarded the Kenneth D. Gardels Award by the Open Geospatial Consortium (OGC) for 2014. The award is in recognition of his “significant contribution to the OGC’s essential role and mission in the global Information Technology community”.

Jeffrey K. Harris, Chairman of the OGC Board of Directors, said: “We wish to express our deep appreciation for the extraordinary contribution you have made to the OGC community and to people around the world who are the ultimate beneficiaries of improvements in the development, management and use of geoscientific data. Devoting your time and bringing your dedication, expertise, critical thinking and leadership to OGC working groups has resulted in significant and enduring advances in technical standards. The value you’ve createdhas been leveraged, and the OGC’s work overall has been leveraged, through your active participation in other standards bodies, expert groups, councils and commissions. We thank you for this collaborative work, for it benefits us all.” 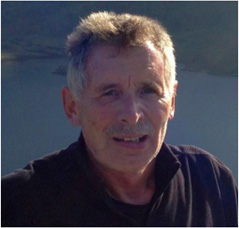 The Geological Society of America honoured Ian Jackson with their Outstanding Contributions in Geoinformatics award for 2014. The award recognises an individual who has contributed in an outstanding manner to geology through the application of the principles of geoinformatics.

Ian was a councillor of CGI from 2004 to 2012. Ian understood the importance of standards to achieve the opening of geoscientific data for diverse uses, and took a decisive part in the recreation of the IUGS-CGI.

The award citation notes Ian’s long and superb service to advance the field of geoinformatics through his pioneering work at the British Geological Survey, to the establishment and unprecedented success of the OneGeology initiative. A dominant theme throughout Ian’s career has been the wide application of geoscience data for societal benefit, a goal he continues to promote as a consultant on the international stage. Ian has been one of the first in geological survey organizations worldwide to understand, and more importantly, to change the organization of the survey to fulfill its role of “information agency.”

Among his many accomplishments, Ian is perhaps best known as the primary instigator of OneGeology - a global initiative to make digital geological map data accessible throughout the world. Ian’s colleagues uniformly refer to his ability to inspire others on the OneGeology concept and build a strong team with the skills to create OneGeology, his keen awareness of how to get things done, and his ability to find constructive ways around obstacles as key to the success of the initiative. 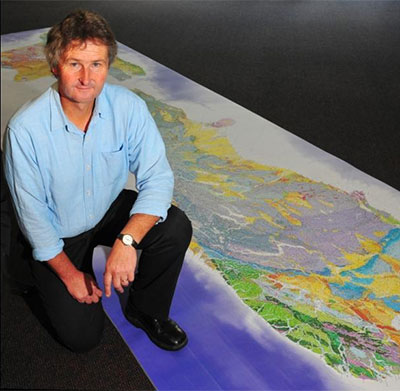 Mark Rattenbury from GNS-New Zealand is the new chair of the CGI Geoscience Terminology Working Group. Mark took over from Steve Richard who handed over the reins after many years of inspirational leadership of CGI’s vocabulary development team. Mark has extensive experience in geological mapping, particularly of complexly deformed and metamorphosed basement terranes of Australia, Antarctica, and New Zealand. He led the 1:250 000 scale Geological Map of New Zealand programme to its conclusion in 2010 and is a specialist in geological map data management and dissemination using GIS software and web services. Mark is also a participant in the OGC/CGI GeoSciML Standards Working Group, as well as being the New Zealand representative on the OneGeology Technical Implementation Group. 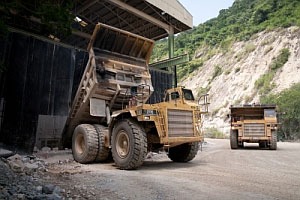 The CGI Geoscience Terminology Working Group (GTWG) recently published 18 new geoscience vocabularies at the CGI’s vocabulary resources website. The vocabularies describe features of mineral resources such as resource shape and form, exploration and mining activities, and resource and reserve classifications. The GTWG worked in collaboration with the EarthResourceML Working Group to compile the new vocabularies to support the EarthResourceML data transfer standard, most importantly as the standard for mineral resource data transfer for the EU INSPIRE initiative.

Preliminary planning has begun within CGI Council for the Geoinformatics Symposium at the 2016 International Geological Congress in Cape Town, South Africa. If you would like to volunteer to help organise the symposium, please contact Kristine Asch. 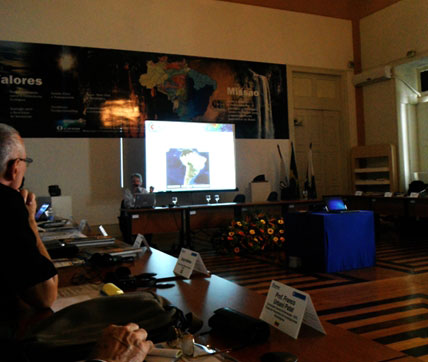 Several CGI members presented at the South American OneGeology workshop in October in Rio de Janeiro, Brazil. Tim Duffy and Steve Richard outlined how CGI standards such as GeoSciML-Portrayal and CGI’s geoscience vocabularies can be used to publish digital map data through the OneGeology Portal. The value of OneGeology as a vehicle to promote data sharing and data standards was emphasised, and Santiago Muñoz Tapia, president of the Ibero-American Geological and Mining Surveys Association (ASGMI), offered to host a future OneGeology/GeoSciML-Portrayal training course in the Dominican Republic. 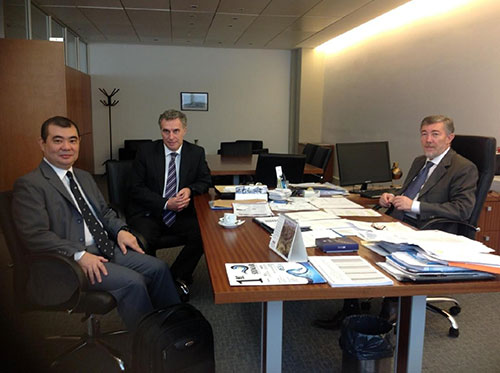 Argentina recently enacted ministerial decisions concerning the development of national science digital repositories. An interview was conducted during 2014 with the Joint Science and Technology Secretariat. Then a meeting with the Secretariat, Dr Alejandro Ceccatto was arranged where the aims and activities of CGI-IUGS were presented to him by CGI councillor Gabriel Asato. Dr Ceccatto was very pleased to know about CGI-IUGS activities and expressed that it could be important to have a geoscience digital information chapter in the national science repositories project.

The 2014 annual report of CGI to the IUGS is now available from the CGI website. The report describes the broad range of activities undertaken by CGI technical working groups and regional groups in 2014. 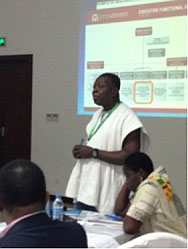 Since its foundation in 2009, the GIRAF network has been present at each Colloquium of African Geology (CAG) with a workshop or a session. A GIRAF workshop was held during 2014 “CAG 25” and the 3rd YES Network Congress in Dar es Salaam, Tanzania. The workshop was opened by the IUGS president Professor Roland Oberhänsli and supported by GSAf president Aberra Mogessie. The workshop was convened by Kristine Asch (CGI, BGR), Mesfin Gebremichael (SEAMIC), Terence Ngole (Geological Survey of Tansania) and Salvatore Mondlane Junior (Eduardo Mondlane University, Maputo). It encompassed seven presentations and additional contributions on geoscience information projects and initiatives in Africa, the African Mining Vision, and the role of GIRAF at universities, followed by discussions and the start of preparation for the next GIRAF workshop in Maputo, Mozambique in 2015. The event was concluded successfully and attended by 49 participants, mostly from Africa, and 20 new members joined GIRAF network. The GIRAF network was kindly mentioned at the final CAG 25 assembly by one of the main organizers, Nelson Boniface, in his concluding remarks as a positive and driving factor for geoscience information issues in Africa. 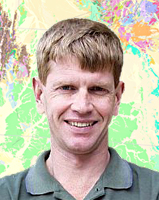 Ollie has been involved in geoscience standards and data modelling since 1994, initially as coordinator of the first GIS data dictionary at Geoscience Australia, and more recently of databases and vocabularies for geological maps, stratigraphy, mineral deposits, geomorphology, and rock properties. Since 2006, Ollie has been a member of, and is currently chair of, the GeoSciML Standards Working Group. He is also an active member of the CGI Geoscience Terminology Working Group. Ollie was part of the Australian team which designed the mineral deposit data transfer standard which is now developed internationally as EarthResourceML. Ollie is a representative on the Australia/NZ Government Geoscience Information Committee, and is the Australian representative on the OneGeology Technical Implementation Group. Contact Ollie. 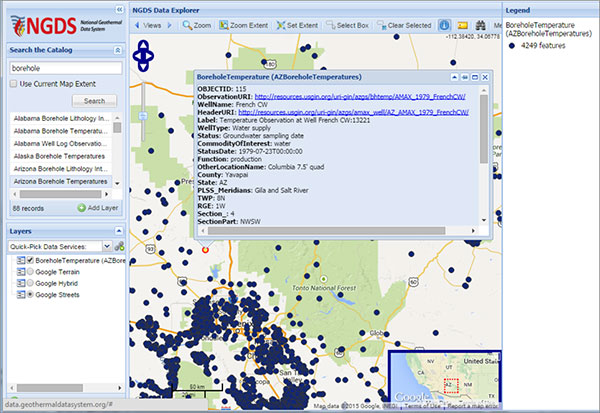 The NGDS Data Explorer is a web application designed to load and display WFS data from the US National Geothermal Data System, a project of the US Geoscience Information Network (USGIN). NGDS provides access to over 30 types of data representing more than 9 million data points and over 17,000 reports and documents. Users can find geothermal-related data from a text or location search. When a WFS has been loaded, a user can then export attributes (standardized data) from this service as an HTML table, CSV file, or Microsoft Excel workbook. 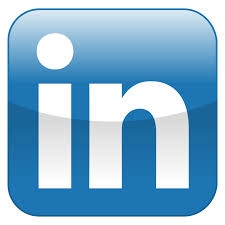